Leave us a message

The Fisher Space Pen pays tribute to the golden age of space travel and Fisher's role in the epic story of Apollo.

During the mid-1960s, Paul Fisher, inventor and owner of The Fisher Pen Company, patented what he called, ‘The Space Pen’, designed to solve an unprecedented engineering challenge posed by the harsh conditions of space. When preparing to go to the moon, NASA discovered that wood shavings and graphite floating around in microgravity posed a considerable hazard to the open switches found within electrical systems onboard the Apollo cockpit. This due to the oxygen-rich atmosphere within the pressurised cabin. The perilous risk to the crew was still fresh in the minds of the public, following the tragic Apollo 1 fire disaster. Fisher knew of the issues NASA was facing with their pencils and had the great idea of making a pen that would work in zero gravity.

The Space Pen was developed and tested alongside NASA for 2 years to design the most rugged and versatile pen ever produced. The Space Pen works due to a hermetically sealed cartridge, which is pressurised with nitrogen and uses a special gel ink that becomes a liquid when the tungsten carbide ballpoint rotates against it.

The Space Pen can write at any angle, on almost any surface, in a vacuum and even underwater. It works in temperatures from -46c to +71c to ensure dependency on mission-critical tasks.

The Fisher Space pen inspires confidence, with its reassuring, weighted feeling in the palm, and substantial click mechanism, that is ensured to work for years to come.

Featuring a metallic chrome finish and timeless design the Fisher Space Pen stands out in a disposable world of throwaway plastic. Each Fisher Space Pen is hand-tested in the U.S.A and guaranteed, unconditionally, for life.

This heritage design, unchanged in 36 years, has gone on to become a staple, not only amongst astronautics but in many other industries too. And it's no wonder why. When Reliability is of the utmost importance, this is a pen you can count on the get the job done.

The Fisher Space Pen comes in a sturdy gift box, with flock lining and includes a pamphlet detailing the history of the pen.

Used on all Apollo, Shuttle, ISS, Russian Soyuz and MIR missions in addition to The French ARIANE Program, Everest North Face Ski Expedition, plus trusted to go to the moon and designed in the golden age of rocket engineering, the Fisher Space Pen makes a refined gift. A dependable tool for those working in the harshest conditions known to mankind.

The Fisher Commemorative Space Shuttle Pen with Medallion distils the essence of the Space Shuttle Program, first launched in 1972. It makes a fantastic gift for any enthusiast. 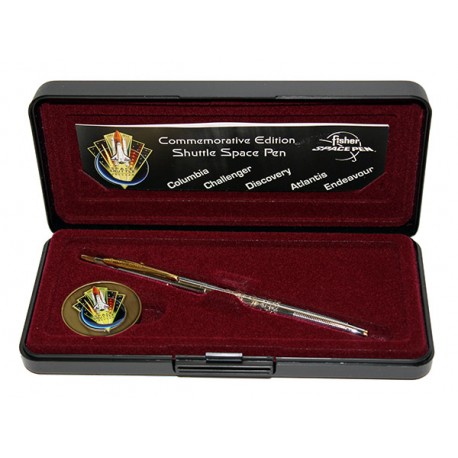